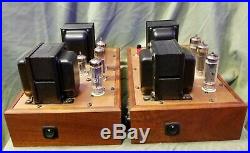 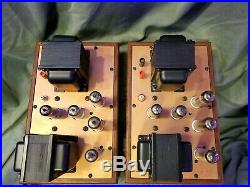 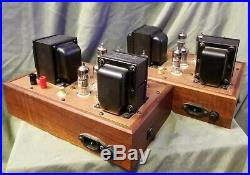 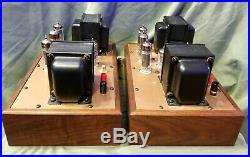 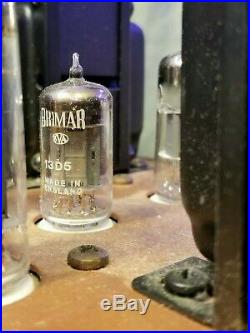 Made from a pair of the famous 6973 based amplifiers that were fitted in the incredibly expensive Ampex stereo consoles. They were VERY high quality. The following is a portion of text from Arthur Salvatore's Hi End Audio (dot) com site about these amplifiers. They are an absolutely INCREDIBLY audio value at this price. Website high-endaudio dot com: AMPEX VINTAGE TUBE AMPLIFIERS I received a letter from a reader regarding these amplifiers, which I barely even remember. I don't have any clear memory of ever hearing, let alone owning, a pair of any of their models. I wanted to ask if you had ever had any experience with any of the Ampex made amplifiers that were used in their high-end consoles?

Even though we disagree on what we LIKE, we all tend to hear similar differences in sound. It was with some sadness when I revealed to them that they had unanimously voted the Ampex monos as besting the Manley amps! (running in both SET and PP) Frankly..... Given what I had paid for the Manleys...

I didn't want to believe it! I have been a tube collector for years, and so had shuffled through DOZENS of different tubes in the Manley's Primarily the 6SN7 and 6SL7 input tubes where I had gone through about 40! Matched pairs of different types over about 3 years of listening.

But I accumulated 6-8 different quads of 300Bs, and a dozen or so 5U4 rectifer quads along the way. As you know, the input tubes can make an enormous difference, but even the best combos did not compete with the stock tubes installed in the Ampex when I received them.

They were never really meant for display and so were not "finished". I now own one set of each of the other amps just for collector's sake. At least for the 6973 based mono amps, I understand that Ampex had the iron custom wound by Triad...

Which probably explains a good deal of their quality. Stacked Quad ESL's / Wyetech (prototype) Preamp / SME 10 / Musical Fidelity DAC / CD / Genesis Digital Lens / REL Tuner, Wasatch cabling, Bybee filters on the amp inputs etc. , but was curious to hear whether you had ever experienced any of them. In any case, I thought they might appeal to you as a somewhat extraordinary audio value. Meaning I believe them able to compete FAR outside of their price range.

Response from Arthur Salvatore: Personal Notes- If the above is true, these Ampex amplifiers, or at least the reader's 6973 monos, are one of the finest vintage amplifiers ever made. Even better, they are totally unknown, and/or ignored, by the vintage crowd (though for how long now). Accordingly, as the reader states, they could be one of the very best values around, outperforming many amps that are far more expensive (even after the mods). Considering this reader's and his friends! Surprising experiences, and their still reasonable initial cost, I would say these amps are well worth making the effort, time and financial investment to do a total rebuild. That means Teflon coupling caps, high quality resistors, all film B+ power supply caps, a chrome chassis, new RCA females, an AC receptacle and speaker binding posts etc. Famous in their own right, they compete with amplifiers MANY times their price. The issue is that they are usually found unfinished, as they were pulled from the back of consoles and never meant to be seen. You can see in one of the pictures what they originally looked like. That was NOT a picture of this particular pair, but they all basically looked like this. His pair, however was made using the original transformers and built onto custom chassis with copper tops, high quality ceramic sockets and all high quality modern parts. While the transformers were painted, they are the original TRIAD OPT that were custom wound by Ampex for these units.

They are absolutely EXCEPTIONAL quality. If you look carefully you can see that the tube sockets are slightly recessed.

This is because the tube sockets were built onto a SECOND COPPER CHASSIS that was then fitted and secured underneath using silicon and felt rings for better vibration isolation from the main chassis!! This was a time consuming and expensive undertaking to make everything fit perfectly. Tube complement is 6973 x 2, 6CA4/EZ81 rectifier, 12AU7/ECC82 (or in this case Brimar 13D5 which is an ECC802S, premium equivalent) and 6084 E80F Ampex Gold PIn PQ substituted for the EF86. Output power is listed as 15w/channel.

Tubes are included as seen... But untested recently so NOT guaranteed.

My guess is they all test fine. These were my personal amps... I would have swapped them out at any point if I had doubts or issues.

No power cords are included. These amps are in working condition and sound wonderful, but they DO HAVE a slight hum to them and will need someone to look at them for a likely capacitor change, I would imagine.

Anything that could affect the sound. At the time these were made, Ampex tube preamplifiers and amplifiers were used in just about every recording studio in the world.

Their gear (including their home audio gear) was incredibly expensive. To this day, many studios are still using and maintaining the original Ampex tube gear as it has NEVER been bettered for sound quality.

At the time, Pilot amplifiers, Fisher, Eico, even Mcintosh amplifiers were all priced BELOW Ampex gear. And the sound quality justified the price. You will be very pleased with the sound and quality of these amps.