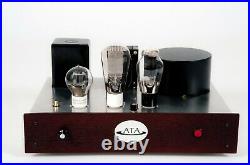 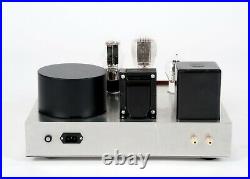 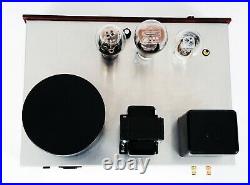 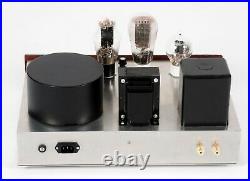 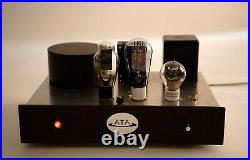 For years I have worked on building a great amp for my favorite tube, the 300B. I have built single ended, push pull, and parallel single ended. In the end I think only the SE 300B has the magic that the tube is known for. I know many companies offer pumped up 300B's with 25-50 watts of power.

Most of them use circuits that favor power over the lush beauty of the 300B. I have chosen a different route. To start with I have studied many great designs of the past.

Things were done differently in the 20's-30's. Considered ancient, useless designs by most, I have utilized many parts of these old designs because of the sound they bring. Back in the early times of radio most were powered by batteries due to the lack of electrical lines. This is why the power for a tube amp is called B+. Later, as AC electricity became more common, most units ran on outside power.

What does this have to do with my amp? Well, the method used to power the filament inside the tube makes a huge sound difference. DC is generally more quiet but less rich. AC can present hum problems but I feel it has a nicer, richer sound which can be made more detailed by the addition of the correct parts.

It is for this reason that I have chosen AC to heat the tubes. The base of any tube amplifier is the power supply. This is what gives each circuit the correct amount and power of electricity. The incoming AC power must be converted to DC and then back to AC in the correct wave form. This must be done with as much filtering as possible.

You do not want the original AC to be imbedded in the music signal. To do this in the old days designers used multiple choke transformers and very small (4 uf) capacitors.

Today capacitors are available in very large numbers. Most companies use these instead of chokes because capacitors are much cheaper than transformers.

This leads us to the 274B rectifier tube. Since it is a very old tube it can not withstand first capacitors over 4uf. I love the sound of the 274B and know that it was usually used by Western Electric for rectification. That is what I use, old school.

The sound of choke filtering over capacitor filtering is very dramatic. Capacitors, especially electrolytic, are not a good sound. I use only small value film capacitors in the power circuit. I use a torrid tranformer rated at 1/2 amp which results in a very large head room. Dynamics must be heard to be believed. The amplifying circuit design is also from the past. It is a very simple design using only a few audiophile parts. It uses a potentiometer to reduce hum from the AC filaments.

When adjusted properly I have no audible hum from my 96db speakers. It is all hard wired using high end parts.

NO circuit board is used. The 300B is a 1:1 replica of the original. The 274B is also patterned after the original Western Electric tube. These tubes belong together and deliver a large, detailed sound stage. The input tube flavors the sound of the entire amp. It is for that reason that I use a CV101 or Russian 1578.

The CV101 is an improved version of the 6sn7. Thi 6sn7 is again a tube that was around in the old days. It has been updated to deliver superior sonic virtues and called the CV101. I also love the very rare Russian 1578. It is a tube that was used in the Mig fighter radar as well as Russian nuclear reactors.

Finally the output transformers are reputed to effect the sound more than any other component. I can offer the highly regarded Electra Print as the standard unit. Other brands can be specified at additional cost.

The extremes of sound production are recreated with a good output transformer. The subtle details, transients, and dynamic content of your precious recordings will not be lost with this amp.

The item "Aural Thrills Audio Decade NO TUBES included 300B 274B mono blocks" is in sale since Wednesday, April 21, 2021. This item is in the category "Consumer Electronics\Vintage Electronics\Vintage Audio & Video\Vintage Amplifiers & Tube Amps". The seller is "auralthrills" and is located in Garland, Texas. This item can be shipped worldwide.