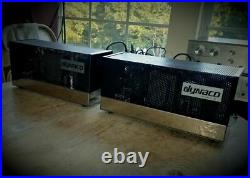 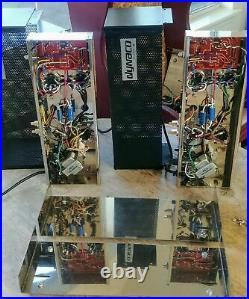 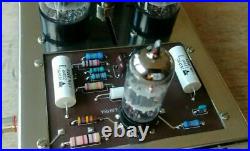 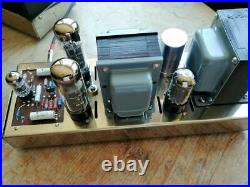 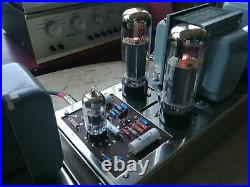 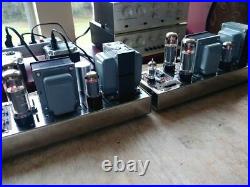 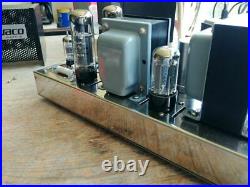 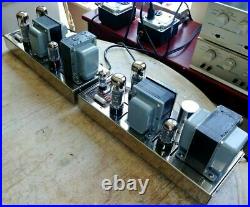 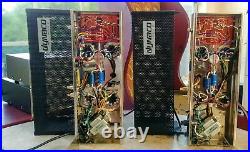 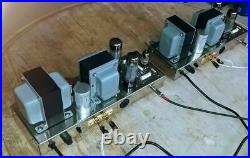 If you love the sound of the Dynaco ST70, you will be blown away from the incredible sound of this pair of Dynaco MK IV amplifiers! Better sound than a Dynaco 70! These amps both have vintage Dynaco cloth lead vintage transformers! These amps are identically matched, fully restored electrically, mechanically and cosmetically, a superb pair of audiophile grade amps.

Original chassis and covers have been restored. All new parts, new boards, new wiring and much more. All new matched tubes are included. Just take a close look and read the details, these are very nice amps and sound incredible.

The photos are considered part of the item description. These Dynaco IV amplifiers, I bought from a technician who specializes in restoring the vintage Dynaco amplifiers.

Following is what he did the restoration. Each of these Dynaco MK IV Monoblock amplifier produces 40 watts of continuous power with peaks of output power reaching up to 90 watts each.

The sonic benefits and advantages of Monoblock's are unparalleled. By having each channel operating through a completely separate amplifier, the stereo separation is phenomenal. This is achieved primarily by each channels output transformer having its own power transformer and dedicated circuit board. There's also a greatly reduced "power sag" as compared to using a standard stereo amplifier due to those type of amps having a shared power source (single power transformer supplying both output transformers) and a single source for rectification for both channels. These are very impressive sounding amplifiers. Essentially the MK IV is 1/2 of a Dynaco 70 with a few extra watts to throw at you, but there is a notable and considerable improvement in the stereo separation, richness and fullness these provide over a Dynaco ST-70. The MK IV is a great sounding amp.

If you like the Dynaco 70 sound, prepare to be blown away by the MK IV! This pair of vintage amps has just undergone a complete electronic and cosmetic restoration, way beyond serviced or upgraded - these amps were totally disassembled then both completely rebuilt starting from a bare chassis up using just the original transformers but all new parts and components otherwise.

This is a true "built to match pair" of Dynaco MK IV amps. Each amp has been electrically, mechanically and cosmetically restored & rebuilt to identical standards. The restoration was focused on making them identically matched and bringing them back to a safe and reliable state while improving their their sonic capabilities, overall quality and appearance. They are just a magnificent pair of amps now. Using both a restored PAS tube preamp and an original condition PAT5 solid state preamp I've put about 30 hours of play on these to break them in and the amps just sound incredible. The MK IV retains the wonderful magic of the push-pull EL34 design with all the sonic advantages of Monoblock's. These are my personal favorites, I just can't say enough about their sound quality. These amps both feature 1960's vintage cloth lead Dynaco transformers. The PA-135 Power Transformers are mounted on heavy duty rubber isolation bushings to prevent mechanical hum from resonating through the chassis, which might appear as hum or noise through the speakers.

Each transformer was tested, cleaned and cosmetically restored. These amplifiers / transformers should be operated only with a voltage reducing device to keep the current at approximately 117 Volts AC. Modern household current, sometimes exceeding 125 volts is simply too high and will shorten the lifespan of the amplifier, causing damage to the transformers and other components. These vintage transformers were designed to operate at 117 volts, not 125 volts. This is important not only for the life and reliability of the transformers and components / tubes, but sonically as well.

The vintage A470 output transformers are simply legendary. These too both have the cloth covered leads. All of the tube sockets are brand new as are the bias adjustment potentiometers, the input RCA terminals and output terminals.

The C-354 filter chokes are new from Dynakit. These are encased in a metal housing for improved shielding, quieter operation. The C-354 chokes were repositioned under the chassis to allow for the larger style rubber feet to be installed, thus giving these amps a nice elevated stance. The original location of the filter choke would not allow room to install a foot on that corner of the bottom plate, so the MKIV amps originally sat on 4 small rubber bumpers. The amps look better and are definitely a lot easier to handle with these regular sized feet now in place, there's now room to get your fingers underneath them to pick them up to move them.

Brand new Dynakit PC-4 "B" circuit boards installed into both amps. These use the stock original Dynaco circuit but are made specifically for using 6U8A or 6GH8A tubes instead of the vanishing and expensive 7199 tube. These tubes are nearly identical electrically to each other except the pin out arrangement is different. This board is made so that you do not have to use tube adapters to use the 6U8A / 6GH8A tubes. That's the only difference and the sound is the same as before.

Dynaco developed this circuit back when 7199 tube production ceased, thousands of amps came direct from the factory with this circuit, this is not some "hacked together" modification, it's the real deal direct from Dynakit. Contrary to some rumors and audio lore, these tubes sound every bit as good, maybe even better, as the 7199. The 6U8A is robust and these amps each include matching military communication grade Raytheon JAN-6U8A (NOS) tubes with their original boxes. Frequency response is improved by means of using very high quality capacitors and low noise metal film resistors throughout the entire amplifier.

I chose Vishay 1839HQ Series capacitors for these amps and they sound absolutely fantastic. I also went with metal film and carbon film resistors in 1% & 5% tolerances to help retain the natural warmth of the original circuit design. The bias supply is all new and features 2 watt resistors and dual 100uF 100 Volt capacitors. The bias potentiometers are also brand new, sourced direct from Dynakit. Safety diodes have been added to the rectifier tube sockets under the chassis.

This is to prevent component damage from current flashback which can occur during sudden power on/off/on sequences like during a power failure or from anyone accidentally switching the amp off and back on too quickly. The Ceramic tube sockets on the circuit boards have gold contacts. All of the wiring is brand new 20 AWG solid core. The preamp power takeoff socket on the rear of the amp has been wired only for bias set function to reduce clutter and electrical interference. Bias is suggested to be set at 1.56 volts DC per amp, the factory specification.

The output terminals are the standard screw terminal type and have taps for 4, 8 & 16 Ohms. The RCA inputs have been updated with very high quality nickel plated jacks, much better than the old original Dynaco jack. The power cords are new 3 prong type. Each amp includes an inline CL-90 thermistor (inrush current limiter) mounted under the chassis. This device provides a time delay voltage ramp up during power up.

The objective is to gradually apply the AC voltage rather than dump a full load on the cold tubes and transformers. It "warms them up" slowly helping to reduce stress and failures from instant power surges that occur when the power switch is activated. The output tubes are a perfectly matched quad of EL34's from NessTone. These are a premium grade EL34 from the Shuguang factory that are tested, graded and hand selected here in the USA. They are excellent sounding and reliable tubes and they look great too. The rectifier tubes are both new tubes by Sovtek - 5AR4/GZ34 type which provide the soft start power up and great DC power. The two preamp tubes are military communication grade Raytheon JAN-6U8A (NOS) tubes with their original boxes.

The chassis were each disassembled to the last screw, hand polished and are really nice but not perfect by any means. The covers are finished in high heat industrial high heat black and feature new custom made aluminum badges. The covers are both original to each amp but were made at different times, possibly by different manufacturers and the perforations on one amp are slightly larger than those of the other amp. Not a big issue but worth mentioning. Operationally I would rate these amps a 10 out of 10, they're as good as new, probably better than new.

Cosmetically I will rate them at 8.5 out of 10 since there are some marks, some blemishes and typical signs of use and age. Lease review the photos carefully for a more complete description.