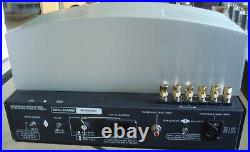 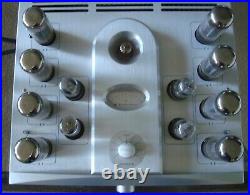 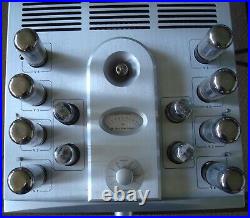 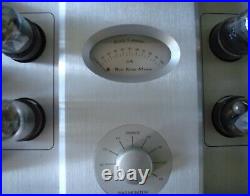 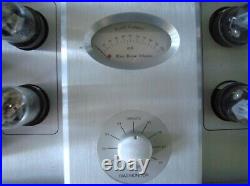 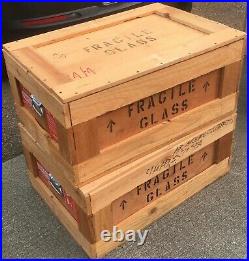 I apologize to the photos quality as they are not the best due to conditions at the time they were photographed. The units were recently checked out by a Technician that assembled these very units at AudioPrism and Red Rose Music in facility in Redmond WA.

The serial numbers indicate that there units were built in 2003 so these would be the very latest versions. Due to COVID restrictions and time I was not able to polish up the units as I would have liked prior to packing in the original crates as one can see in the last photo. I would rate the condition 8-9 out 10, one wire clamp that holds in the 20 amp IEC is is loose in one side not a big issue but I did. Not have the tools at the packing. The Units are in the Seattle area and the tubes and transformer covers are in California.

I encourage you to checkout my feedback! Each crate is approximately 90 pounds. The below information is copied from Raptor Electronics site owned by Brian Hawkins who was an integral part of the AudioPrism - Red Rose engineering team. AudioPrism Mana and Red Rose Music Model 1. The Mana amplifier initial design was by Victor Tiscareno with additional work in collaboration with Brian Hawkins.

AudioPrism had an Issaquah and later a Redmond, Washington address. Manufacturing, Sales and Service continued in Redmond after the sale to Red Rose Music until the location was closed and tube electronics discontinued. All configurations were a tube mono amplifier incorporating one 5842, four 6SN7 and eight 6L6GC tubes. The chassis is aluminum with dampened top and side panels and an attached front panel.

The transformer cover was removable. A detachable 20A IEC power cord was provided. The line fuse is contained in a rear panel receptacle. The amp has one line input, selectable between single ended or balanced. Operating modes are Off, Standby, On and Auto-Mute. A delay of 60 seconds was incorporated between Off and On to allow the tubes to warm up and reduce. Turn-on surge due to the large capacitors.

A front panel bi-color LED indicates red for Standby, yellow during warm-up and green for On. A rear panel switch allowed floating the signal. Ground or connecting it to chassis ground to obtain the lowest signal hum. The power transformer provided multiple windings for the various rectified and regulated supplies.. Two high voltage windings for the HV and HV reference generated a rectified 500VDC that was regulated to 450VDC for the output tubes and the regulated 400VDC supply.

The 400VDC fed separate regulators for each gain tube section, the single-end input phase splitter and the driver tubes. Separate filament windings were provided for the regulators of the output tubes and the input/gain/drive tubes.. The bias supply winding were separate and regulated. An additional transformer supplied the control circuit board while power was off and for switching, mute, delay and the Auto function.

The amp could be rewired for 90-240VAC operation. The circuitry was configured as a balanced amplifier with the addition of a 417A/5842 phase-splitter at the input for single-ended operation. 6SN7 tubes were used for gain and driver tubes.

Each phase was independent up to the output transformer. Separate feedback windings were provided for each phase to the 6SN7 input tube cathode providing 6dB of global feedback. The dual section 6SN7 gain triodes are operated providing gain as a grounded cathode amp feeding the other section.

An AC balance control adjusts the signal level on one of the input tubes to compensate for gain differences between phases. The 6SN7 driver tube is used as a white follower, capacitor coupled driving the 6L6GC output tubes. The output tubes are operated with fixed, individually adjustable bias. Switching is provided for Triode and. Cathode fuses were provided for each tube.

The Auto-Mute mode monitored the signal into the amp and if there was none for an hour, reduced the output tubes current. By applying more negative bias and muting the amp. This would extend the tube life by reducing the current from 45mA to about 2mA per tube. When a signal was detected, the bias regulator voltage would return to normal, tube current would increase back to normal operation and the amp would un-mute. A control for each phase driver set the DC voltage level on the output coupling caps the same as provided in un-mute condition.

The 6SN7 tubes were JAN/Philips, Sovtek and then Electro-Harmonix 6SN7EH. The 5842 was Raytheon or optionally a WE 417A. Outputs had been 5881, 6L6WXT then Ruby 6L6GCMSTR. Tubes used were selected for low microphonics, noise, distortion and 0.25dB.

In evaluation and subsequent QC testing, they had been run in the burn-in rack, tested for gain, current and bias and found to be extremely consistent. Consequently they were used with the normal 72 hour amplifier burn-in. New output transformers increased power to 140 watts with 6L6WXT tubes. Input and feedback wires change to Red Rose Silver, resistors changed to Caddock and the driver tube bias changed. Later the fuses for the output cathodes were moved the the top of the amp for convenience and Micro fuses were used.